Skip to content
Attending the LUG meeting this week:
Jon,Les,Tony,Ollie,Mike, and a brief appearance from Les’s new boss.
Using an Arduino as a programmer to burn the bootloader onto a blank chip.
The Arduino IDE has a sketch to turn an Arduino into a programmer, so you upload that sketch to the Arduino, then connect up as described here.
Full wiring details on the Arduino site here:- http://arduino.cc/en/Tutorial/ArduinoISP
Once connected, use the Arduino IDE, and select tools, programmer, Arduino as ISP.
Then tools, burn bootloader.
Thanks go out to Cefn at http://shrimping.it/blog/ for his help in sourcing parts to build an Arduino for less than £5 http://shrimping.it/blog/bill-of-materials/

This is the wiring/circuit from the Arduino.cc site guide linked to higher up. 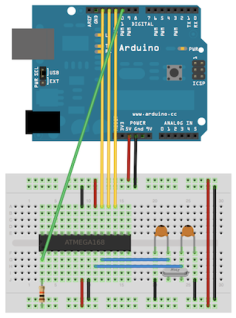 Moving on to building the Arduino with the chip we just burnt the bootloader to:
This is the home made Arduino running the blink sketch, the red dot in the middle of the board is the flashing LED.

The windows driver, for vista/7/8 is here:- http://www.silabs.com/products/mcu/Pages/USBtoUARTBridgeVCPDrivers.aspxThis is Cefn’s picture of how to attach the USB module

With USB attached like this, no external power supply or batteries are required, and you can use it in exactly the same way as a £20 Arduino Uno.

The finished stripboard version, which can use external power, or be powered by USB.

Moving on to connecting wireless transceivers. The aim is to allow an arduino fitted with one of these transceivers and a temperature sensor to send data back to a second arduino acting as a base station. The two in the picture below are managing about 12 metres range through walls, and should allow me to place temperature sensors all over the house. I am following information found on this site. Open energy monitoring project

The next step will be to build these temperature sensor boards up on stripboard, and set them up with battery power, and power saving code, as described here:- http://interface.khm.de/index.php/lab/experiments/sleep_watchdog_battery/