Arthur sent this to the mailing list, and it was enough to bring Donald out of retirement. (welcome back Donald)

“Jack and I will see you there.
I’ll bring my robot and my PIC development kit to show – I’m just starting to code the movement of the robot so the project is at possibly the most interesting bit to see.”
Arthur brought his rubber band firing robot and a lengthy discussion ensued around the robot and the Integrated development environment used to program the PIC chip driving the robot.
The difficulties in synchronisation were discussed, including software and hardware interrupts, polling, loops and the use of the ‘volatile’ keyword to prevent the compiler optimising away code that you do not want  ‘optimised’, 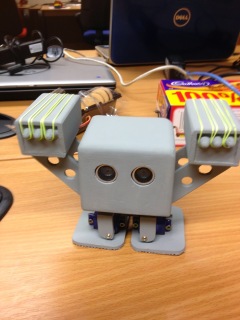 Arthur then moved on to help his son Jack who was programming a game in scratch for a school project.
Donald  started work on the 3D printer.
The printer has been kindly donated via Liverpool makerspace, and just requires some finishing touches before it is ready for use.
The filament drive motor was fouling one of the table drive belts, Donald refitted the motor and also re-aligned the the other drive belt. There is still some work to do on the vertical drive shaft locators. 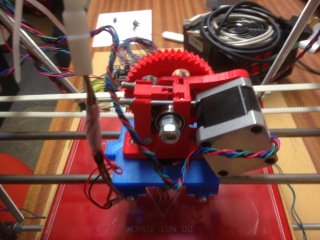 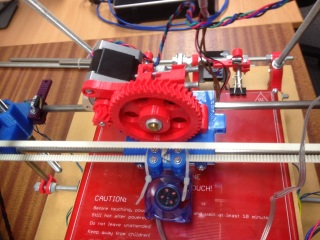 Mike helped Elizabeth install Mint 17 on a “rescue laptop from a waste bin”  which had been vandalised. (screen cut off). GRUB needed amending to make the laptop boot up.
Elizabeth’s desktop had failed to power up at home but powered up fine at Club.
Tips were provided on how to find the problem if it failed to power up at home again.
Extra power cables were given to see if that is the problem.
Elizabeth’s 2nd desktop was giving warning of a ‘hard drive imminent failure’  on start up.
This was generously repaired by fitting a replacement SATA hard drive kindly donated by Mike.
Hosted by Mike who also kept the coffee and Jaffa cakes flowing.
Thank You to Elizabeth for writing this post.